skip to main | skip to sidebar

Eric Doeringer, "I Got Up" 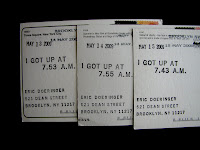 Brooklyn-based artist and provocateur Eric Doeringer has been stirring things up for some time now. Beginning with bobblehead self-portraits in the late 1990s, he then broke through to a national following with his series of "Bootlegs", begun in 2001.

These small knockoff canvas copies of recognized contemporary artist works have garnered him the occasional "cease and desist" letter. Doeringer is as likely to be seen hawking his wares on New York sidewalks, and carting work around in suitcases to sell in front of art fairs, as he is to show in formal gallery spaces.

Other series he has created include fake museum ID badges, elaborate bongs that look like minimalist sculpture, and a Matthew Barney fan site that is both parody and homage. In other words, Doeringer's work thrives on multiple readings, and the capacity for misunderstanding.

Recently, we caught up with the artist on his current project of On Kawara inspired postcards, the "I Got Up" series.

Dancing Ganesha: So, what time did you get up this morning?

DG: How much truth is there to the line from your "Grennan and Sperandio" bootleg: "I don't necessarily choose my favorite artists -- I'll copy anybody who's hot right now."?

ED: That quote is 100% true about the "Bootlegs". That series is all about the art market, so I chose artists whose work I thought would sell easily -- basically those with the most "hype". Some of them are artists I like, but definitely not all of them. Lately, I've been working on a series of works that are a little different -- I'm recreating iconic works of Conceptual Art by artists like Sol LeWitt, On Kawara, Lawrence Weiner, and Ed Ruscha. With this series, I'm choosing pieces I like (and that are, ironically, somewhat difficult to market).

DG: The subtle autobiographical elements in what at first glance appear to be only appropriated knockoffs are one of the most compelling aspects of your work. Any thoughts on that?

ED: A number of the "Bootlegs" are explicitly autobiographical: the date on the "On Kawara" Today paintings is my birthday, the "Julian Opie" is a self portrait done in the style of Julian Opie, various family members appear in some of the Bootleg photographs, etc; but it's been said that all art is autobiographical, and I think that's true. A few years ago I made an edition of counterfeit VIP cards for Art Basel Miami Beach. That project might not appear autobiographical, but I had attended the Miami fairs for the previous few years and spent a lot of time trying to talk my way into various parties, fairs, and other events. A VIP card seemed like a ticket into life among the high rollers of the art world, so that project was partly about me feeling like the "little fish" trying to sneak into the "big pond".

With the new "Conceptual Art" pieces, I'm basically following scores or directions that were laid out by the original artists 40 years ago. I'm interested in the extent to which the distance in time and space from the originals and the fact that I'm the one making the pieces affects the reception of the artwork. The "On Kawara - I Got Up" postcards are obviously autobiographical. On one hand they're cool and detached, but there is something oddly intimate about them, as well. I also like the way that the date and location indicated on the cards is "authenticated" by the postmark. I mail them to friends, collectors, and others to whom I want to send a little "thank you". It's kind of unusual to make a piece of art every day expressly for the purpose of giving it away.

DG: How does a new idea usually present itself to you?

ED: Ideas come to me all the time, and I try to write them down in my sketchbook so I don't forget them. Every now and then I go back through my notes and see which ideas still seem interesting. Sometimes I'll work on tweaking an idea over several months (or years); other times the original idea is pretty much fully-formed. A lot of ideas get thrown out, but sometimes elements reappear in later projects. Some of the long-term projects like the Bootlegs or CremasterFanatic.com (a "fan site" dedicated to Matthew Barney) grow organically once I start them.

The first time I sold the Bootlegs on the sidewalk in Chelsea, I had copied about 40 different artists. I continued adding artists (weeding out a few that didn't sell well) so that I would always have fresh "product", and have now copied more than 100 different works.

When I launched CremasterFanatic.com, I scoured the internet for anything I could find that was related to Matthew Barney. I still do web searches every month or so to look for new material, but now I frequently receive emails from Barney fans with links, artwork, news items, etc. I enjoy that the site appeals to both people who love Matthew Barney and to those who hate him, and that I've created (or at least identified) this weird online community.

DG: Your work seems to function best when it is misunderstood. Any recent experiences in that regard?

ED: A friend who received some of my "On Kawara - I Got Up" postcards but who wasn't familiar with the original piece asked me if it had something to do with Twitter. I like the idea that Kawara invented the "tweet" before the internet existed, using telegrams and the postal service. If he was a young artist today, would Kawara be a blogger?

ED: I just finished making a "Sol LeWitt Wall Drawing" in my studio that consists of 10,000 4-inch long straight lines. LeWitt made a number of drawings involving permutations of "10,000 lines", and I wanted to get a sense of how long it would take to make one. I'm also finishing up a recreation of Ed Ruscha's "Stains" - a portfolio of 75 different stains (ketchup, urine, grass, motor oil, etc.) in a handmade box that mimics the original. I've made all of the stains except for gunpowder, which is somewhat difficult to obtain in New York City.

The worst one was "blood of the artist". I'm not particularly grossed out by blood, but it was hard to cut myself consciously -- I never went through a "self mutilation" phase as a teenager! The piece is an edition of 10, and I was totally afraid the wound would close before I squeezed enough blood out and I'd have to cut myself a second time.

Eric Doeringer's work can be viewed online at http://www.ericdoeringer.com.
Posted by Randall Garrett at 7:40 AM

Randall Garrett
"Artist and archaic wondering soul in search of beauty among the trash heaps of modern life." I am an artist, writer, and curator working in performance, installation, video, and sound. Check out my art here: art video sound facebook twitter